A people’s story of People’s Park 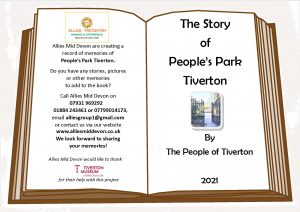 n have commissioned Orchard Stonemasons to repair and rejuvenate the Ornamental Drinking Fountain in People’s Park, Tiverton. Whilst talking to people about the Park, many memories were shared, and stories told, inspiring Allies to try to create  ‘A People’s Story of People’s Park.’

Did you do your courting in the park? Do you remember the fancy dress competitions? Did you play on the swings and seesaw near the top gate? Photos and postcards can tell us what the park looked like, but they don’t tell the whole story. Do you have memories you’re happy to share? Allies would like to make sure that no more of the park’s history is lost. To get in touch with them and share your memories email alliesgroup1@gmail.com, or telephone 01884 243461 or 07931 969292.

The park was established to celebrate Queen Victoria’s Golden Jubilee in 1887 as the first of Tiverton’s three public parks. Various benefactors helped to raise the funds to purchase the land for the park, which included subscriptions from over 1,500 local people. The opening celebrations on July 5th 1888 included a lunch and a flower show which included ‘horse jumping, a traditional English fair and novelty entertainments.’

There were a number of buildings and sculptures in the park from the very beginning. An elegant bandstand was presented by Alderman Lane but no longer exists. Nor does the canon from the Crimean War which was used as scrap metal in the Second World War. The drinking fountain being repaired thanks to Allies Mid Devon was presented by Rev. Hadow in 1888.

The park has been the site of many town celebrations over the years, and a number of trees have been planted to mark anniversaries. A tulip tree was planted in 1937 to celebrate King George VI’s Coronation, and in 1965 to mark the 350th anniversary of the Charter of Incorporation a ‘charter oak’ was planted by Princess Marina.