People’s Park was established to celebrate Queen Victoria’s Golden Jubilee in 1887 as the first of Tiverton’s three public parks. The core of the park was an area of land called Govett’s Field, with an adjoining piece of land added. The purchase of the land was supported by John Coles and subscriptions from over 1,500 local people. Tiverton Museum of Mid Devon Life holds a number of documents and deeds relating to the establishment of the park, including an early plan for the layout of the park which incorporated some land to the west known as the ‘Park’ for many years.

The toll house at the north end of the park was adapted into a Park Keeper’s house by one of the three entrances to the park. A booklet written to raise funds for the park notes that four acres of the fields were to be laid out as a promenade and children’s playground, and two and half acres to be reserved for a boys’ recreation ground. 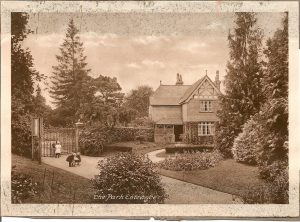 The park has been furnished with a number of features over the years, including a bandstand presented by Alderman Lane (no longer in existence), the drinking fountain presented by Rev. Hadow and the canon which was used as scrap metal in the Second World War.

The opening celebrations on July 5th 1888 included a lunch and a flower show which included ‘horse jumping, a traditional English fair and novelty entertainments.’

The early rules of the park included:

George Harper was appointed as Park Keeper in 1887. The terms of the job included that ‘applicants must be able-bodied and respectable men’ who applied using their own handwriting and could provide two testimonials. The Park Keeper and his family would live in the cottage on the grounds with eight to nine perches of garden ground rent free with a weekly wage of fifteen shillings.

The park has been the site of many town merriments over the years with various teas and events laid on for Royal celebrations and other occasions.