On November 11th 1920, the War Memorial Library was opened in the building which previously served as the Angel Hotel. The Gazette reports how the Library was used during its first year:

‘borrowers were of all classes, including many young people, as well as adults and quite a number of old people in the almshouses’. 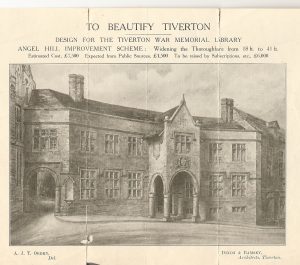 Tivertonians were still raising funds for the development of the new Memorial Hall, which included the Library. The photo shows the laying of the Foundation Stone in 1928 and the new building was opened the following year.

The lives of citizens of Tiverton who died serving their country are honoured. Their names are inscribed on tablets in the Memorial Hall. They name 281 men and women who fell in the First World War, 80 in World War 2 and 4 in more recent conflicts.