There was very little in the Gazette of 6th December 1921, apart from this advert for W H Smith, to herald the coming of the Christmas season. 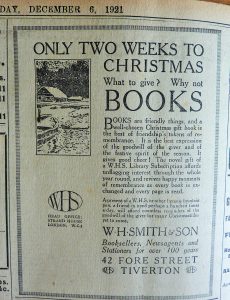 There was a report of a ‘Smoking Concert’ held in the Oat Sheaf Hotel in Crediton. These were a popular form of entertainment for men during the Victorian era and for some years later. New musical acts would perform and the audience would smoke and talk politics. In Crediton the entertainment was ‘a clever ventriloquial turn’.