In the two editions of the Tiverton Gazette in mid to late December, it becomes clear that Christmas is coming. There are advertisements for Christmas presents and special offers on alcohol. Even at 12/6d (62.5p) for whisky and 12/- (60p) for gin this was beyond the means of most people when the average wage was about £2 a week.

‘Cullompton shops in the week before Christmas were most attractive with displays of seasonal goods and traders were kept busy. Two carol parties were in evidence’.

There were also announcements for the Town Band, seasonal concerts and a Christmas Tree for the Infant School children. However ‘considerable disappointment was expressed that there was no football game in the town on Saturday or Boxing Day’. The photo is of Cullompton Town Band in 1905.

Joey’s Jazz Band, under the direction of Mr G Chown, was very popular during the 1920s and the Museum holds a small collection of posters. This one, held in North Devon, promised fun just after Christmas. 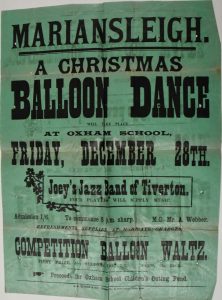