The biggest object in our collection is the GWR steam locomotive 1442, known as the Tivvy Bumper. The name the ‘Tivvy Bumper’ originally applied to all trains working on the branch connecting Tiverton Station and Tiverton Junction at Willand. Between 1884 and 1964 trains ran daily, connecting the main line trains at the junction with the Exe Valley trains at Tiverton.

The 14XX engines were designed to work with the GWR design of auto coach, a specialist coach designed for push-pull working meaning that the engines didn’t need to be turned around before making a return trip up the line. These were ideal for working on branch lines, and were used on the local Exe Valley and Culm Valley lines. Loco 1442 was built by GWR in Swindon and served as the Tivvy Bumper. It also pulled trains on the Exe Valley line, from Exeter St Davids to Dulverton, and on the Culm Valley Line, from Tiverton Junction to Hemyock. Following the withdrawal of the Tiverton passenger services in 1963, loco 1442 briefly served on the Yeovil Town to Yeovil Junction branch, and then on the Seaton branch. 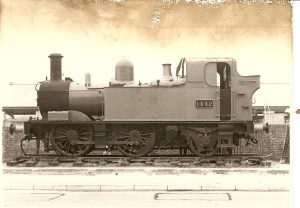 Loco 1442 returned to Tiverton in 1965 when it was purchased by Viscount Amory for Tiverton Museum. Initially the engine was displayed on a plinth close to the former GWR goods shed on Blundell’s Road. In 1978 the engine was moved through the town to the Museum where a new transport gallery was built around the engine where it remains today. Our visitors (and staff!) love walking onto the footplate and pulling the whistle! 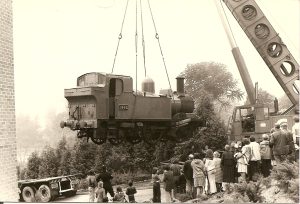 The Tivvy Bumper being lifted by crane into place at the museum.

You can see our most iconic object in all its glory, as well as lots of other railway related fun, in our Bumper Half Term this February.