The Scouts have chosen a good venue for their Jumble Sale in 1922, featured in this advert; it was held in the School in St Andrew Street which is now part of the Museum! Next time you walk down the Street, have a look and note especially the separate entrances for Girls and Boys. In the week following the Jumble Sale, the Gazette reported that £160 had been raised towards the £250 target. 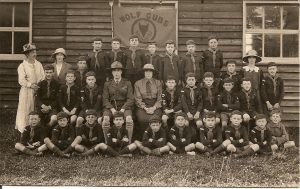 This photo, from the Museum’s collection, shows the Tiverton Wolf Cubs in about 1920. The Cubs were founded by Baden-Powell, only a few years earlier, in 1916. It looks as if the photo was taken at the old Scout Hut at the Canal Basin. It was taken by W Mudford and Son, photographers. If you look back on our Facebook page to February last year, you can learn more about the enterprising Mudford family. The censuses show that, apart from one son who worked at the lace factory, the whole family were involved in the photography world. By 1939, their eldest son, Walter B, was working as a freelance photographer in St Andrew Street, a nice link back to the Scout’s jumble sale in 1922!