In late August each year, the Gazette has at least one page, if not more, devoted to the annual ‘shows’ held in almost every village. In 1922, Silverton celebrated their ‘13th annual show and sports’ and they had a record attendance. The attractions included ‘skittling for a live pig, guessing competition (weight of a bullock and live pig), dancing etc’. The Town Band was there, as well as an entertainment group the ‘Silverton Concert Party’. There were judges for three sections; dairy produce, wild flowers and vegetables, gardens and allotments. The potatoes were judged in four classes; white kidney potatoes, white round potatoes, coloured and collection potatoes. 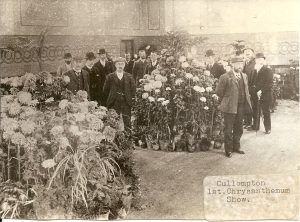 Many of these annual village events continue, in some form, to this day. Although we have many photos of recent shows featuring enormous vegetables, flowers, races and more, we have hardly any from the pre-war days. One, however, led to an interesting story.

The first Stoodleigh Agricultural Show was a huge success and it led to the decision to try a show on a larger scale in Tiverton in 1900. There is a long article in the Western Times of November 3 1899 describing the pros and cons of three potential sites. It was decided to hold it at the Athletic ground where the show flourished and remained until the 1960s. 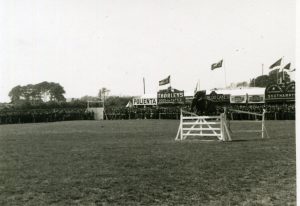 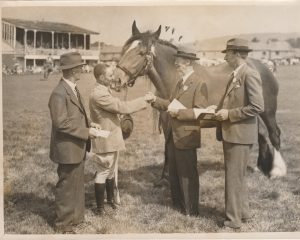 Tiverton Showground at the Athletic ground

In 1922, Stoodleigh held its third Flower Show and for the second year running were plagued with bad weather.