Tiverton Swimming Club regularly reported their activities in the Gazette. In July 1922, as well as listing ‘handicaps’ in the senior and junior sections for men and ladies, the programme for the annual gala was announced. ‘Mr Scrivens of Exeter will demonstrate the ‘crawl’ stroke’. Various activities were planned ‘to encourage the young swimmers and provide interesting sport for the spectators’. These were listed as: diving and plunging competitions, a top hat and nightshirt race, a feeding bottle race and a pillow fight!

We have several swimming trophies awarded by Tiverton Schools over the years but only one, in a rather poor state, from Tiverton Swimming Club. It is a highly decorated goblet which belonged to the Ladies Section. 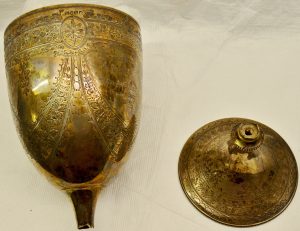 The first swimming pool in the town was in St Andrew’s Street. It was opened in 1879 and in 1922 was still in use. The photo shows a life-saving demonstration. 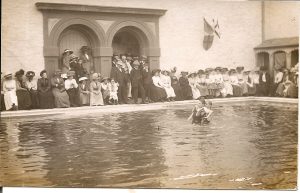 During the 1920s, however, a new pool was built in Leat Street which served the town until 1971. In the photo you can see several of the 57 ‘dressing boxes’.